How Did I Get Here?

Back in 2005, I traveled across the country in a VW van—which is, I admit, my generation’s version of a religious pilgrimage.During that trip, I listened in fits and starts to Susan Orlean’s travel stories. I felt I’d found a friend on that razor’s edge of outer loneliness and inner familiarity you feel when you find yourself a stranger in a strange land (like being stuck for three days in Santee, South Carolina.) Deeply displaced, but not really lost. 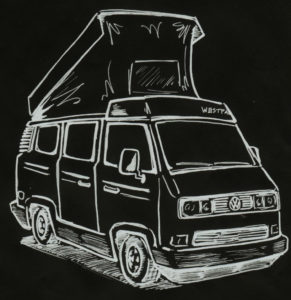 All writing requires at least some sense of separateness, doesn’t it? Even if you’re writing about the oneness of all creation—in which case that sense would seem to belie your message. That’s one reason I like airports, train stations, crowded highway rest stops: any place I can look at the faces of hundreds of humans I’ve never seen before and probably won’t again. Many people share the sheer strangeness of these places—which makes them oddly unifying rather than separating. But traveling still always reminds me of the way I felt when I was 14 and, despite all evidence to the contrary, felt I was the only 14-year-old who ever arrived at Grand Central Station and walked the streets of Manhattan alone. More than 40 years later [oops, make that 55…I first did a draft of this a long time ago.), rather than feeling lost in those crowds, I felt found in them—that I’ve again rediscovered a sense of myself I can’t experience any other way. A sense of separation that I need in order to keep writing. Even when face to face with the oneness of all creation.