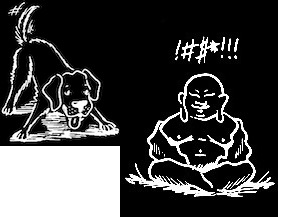 I like the idea of meditating in the morning. In fact, I did it every day for about 20 years. For some people, it’s a gentle way to make the transition between the chaos of dreams and the illusion of structure. But, for me, it’s like telling a dog that just woke up to lie down again. Got to let that puppy out to run around for a while. After a hit of caffeine and a distracted look out the window, ideas start bubbling up. To try to let them go or tamp them down—what Plato called —seems not only like an exercise in futility, but oddly unnatural. Often, it’s just a phrase or sentence that comes to the surface. Occasionally, it’s a big-time holographic vision that can take months to elaborate.

When I was younger, I’d try to keep my legs crossed and mind relatively still, while quietly sending those thoughts off into a kind of mnemonic holding tank. But now, if I don’t capture them while they’re flying by, I’ll never remember them and, more importantly, why the hell I thought they were so brilliant in the first place. Which, often, they’re not. But it’s sure easier to write them down than spend all day trying to remember them, only to realize it wasn’t worth the effort.

Eventually, my mind stops on its own to take a breather. Like that dog who, after chasing a frisbee for a half-hour or so, is panting so hard its gullet is hanging out. She may act like she wants more, but is actually quite content to collapse at your feet.

And so, after a half-hour or so of calmly drinking coffee while frenetically capturing ideas, I can eventually lie down peacefully at my own feet.