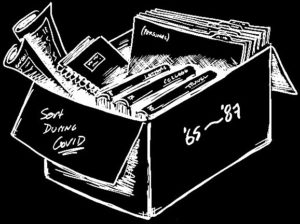 Out West, they have a lot of land that’s really dry. So instead of storing things in garages, storage sheds, barns, and basements, some people just pick any old out-of-the-way spot and start piling up baling wire, fence posts, old plumbing fixtures, electrical components, and every car part known to man or woman. I have a friend who never throws anything out. She calls it her gold mine. And she keeps it really organized. Because you never know when you might need a carburetor for a 1952 Ford Pickup…and pronto.

Although I’ve never had much interest in (or memory of) my personal history, my mother did. I still have one box of random memorabilia that, despite my urgent pleas that she throw it out, I agreed to take in a moment of weakness. And now I’m glad. Because you never know when I might need that stack of gas station card receipts that trace the route of my family trip on two-lane roads to Colorado when I was 11. Or one of those Junior High French assignment books that happened to survive forty years in the attic trenches and could become a Proustian device for my personal recherché du temps perdu.

There’s a whole envelope full of report cards that my mom stashed away in a manila envelope that she carefully labeled—her neat backward-slanting handwriting alone brings it all back. Behind it is one of those old binocular-like ViewMaster things and a few remaining circular discs with the tiny slides of places I liked to imagine visiting  And then there’s that banker’s-file type Pandora’s box full of letters that I always promised I’d burn. Everybody has one of those.

The box my mother saved is in my closet. Along with several binders and bins filled with all kinds of research, writing, and memorabilia that I’ve collected since then. There’s a large scrapbook of brochures, maps, and matchbooks from my 2005-2006 cross-country trips in the VW van. I’ve drafted some pieces about those walks on the wild side of America and have convinced myself I need to keep the research in case I ever try to finish them. There are several journals that also need to be mined for the occasional gem. And I have 40 years of tax returns which, while now worthless even to the IRS, remind me of all the different ways I’ve made money over the last several decades along with several binders of statements that remind me how I spent it.

When I realized how much more time I’d be staying at home during COVID, I decided it would be the perfect time to merge and purge it all down to a few notebooks/binders/scrapbooks that would fit on half a shelf. Then I could throw the rest into a dumpster. That way, whoever had to take on the onerous task of sorting through all my worldly goods might keep them for some descendent down the road who wondered what his/her great-great-grandfather was like.  I didn’t get very far. You can’t blame me.

They say your life passes before your eyes in a flash when you die. It takes longer when you’re alive.