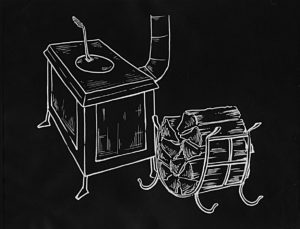 Some people had their windows wide open. Some had heaters under their desks. Some wore sweaters. Others just t-shirts. Some people drank iced coffee while others needed hot. (As I remember, one person simply transitioned from gin-and-tonics to Jack Daniels straight-up.)

You could attribute some of this to the vagaries of temperature in a high-ceiling, open-office type space. But it more had to do with the vagaries of personal comfort. Eventually, we gave up and installed some kind of fancy microprocessor-controlled thermostat that allegedly time-zoned the entire place. That way, the people who got in at 7 am would be warm enough, and the ones who were still working at 7 pm wouldn’t be overheated. Which worked fine until just about everybody figured out how to re-program the thing.

These days, I only have to argue with myself about the temperature—although that’s not necessarily an improvement. Some of my best writing has been done while drinking hot coffee on chilly October mornings during the days (and sometimes weeks) while I wait for the guy from the oil company to come “bleed” the heating pipes until the radiators start hissing. Then, there are a few weeks in December when the sun starts coming in at a certain angle that makes it impossible to see the screen until I pull the curtain, even though my face and feet are still cold.

But the biggest climate-controlling challenge I’ve ever faced, or, more to the point, the most enjoyable distraction (since this blog is about what writers do when they’re not writing), was regulating the temperature of the Tempwood wood stove in the otherwise unheated cabin where I wrote for many years. On frigid February mornings, even if the embers were still going, I had to slowly load the kindling and logs to achieve a Goldilocks-worthy just-right temperature as I walked around rubbing my hands to get my fingers warm enough to move on the keyboard.

By late morning on those days, I could continue my Quixotic quest for the perfect temperature by adjusting the overhead fans that slowly circulated the warmer air down towards the floor while continuing to make minute adjustments to the stove based on outside temperature, amount of sunlight, wind velocity, and other climatological influences that I could feel in my bones, even if I couldn’t name them.

Putting on sweatshirts, taking off sweatshirts; heavier socks, lighter socks; woolen hats and baseball caps (you lose a lot of heat through a bald spot, you know); opening windows as wide as possible; raising and lowering storm windows; putting air conditioners in and taking them out; adjusting the placement and speed of fans and heaters; going outside for a walk because it’s still too hot or too cold. It’s all part of the creative process. When you’re hot, you’re hot. And when you’re not, well, it’s time to adjust the temperature.

(We can deal with music another time.)