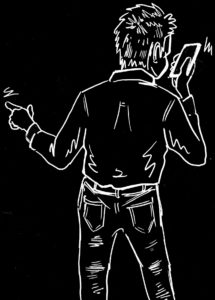 I Talk to Myself.

I think most writers do. At least our lips move. After all, who else could fully appreciate the raw, half-baked ideas that run roughshod over our brains waiting and hoping and thinking and praying that we can eventually bash them into coherent submissions? More importantly, who better to appreciate the sound of our own voices and the transcendent, narcissistic secret thrill of reading our own words again and again? At the same time, reading what you wrote out loud is usually a humbling experience—or should be. Sadly, you have to admit it’s not the raw stuff of brilliance. It’s the stuff you thought was brilliant, but turned out to be flat, lame, poorly constructed, confusing, and, at worst, banal. If you really want to put yourself in your place, read it into a tape recorder and then play it back. If that’s not enough to make you cringe, then either you’re really good, really lucky, or, more likely, not listening closely enough.

Recorders are good for more than just self-flagellation. They’re very helpful for interviews, meeting notes, and even the occasional rough paragraph that appears unexpectedly in your right frontal lobe when there’s not a single pen, pencil, or piece of paper in sight. 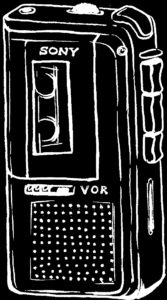 I bought my first recorder in the early ‘80s when the iPhone was just a minuscule glimmer in Steve Jobs’ deep subconscious. It took the same size cassettes that were used to play music and was kind of clunky in retrospect. But, at the time, I was working at an ad agency and it was a major breakthrough in the art of interviewing clients—particularly when they were explaining something that seemed overly complicated—like reverse mortgages, the difference between RAM and ROM, or the inner working of hydroelectric dams. (See https://davidblistein.com/about/ for the whole list). Instead of trying to scribble notes while thinking of the next question, I could focus entirely on asking virtually the same ones again and again until I vaguely understood what the person was talking about. Plus, I discovered if you badgered a client long enough, they’d eventually blurt out the perfect headline. (I once made up a list of the ten most important questions to ask. By far, the most important one was some variation on, “yeah, but why the f— should anyone care?” Not a bad question for writers to ask themselves, too…) 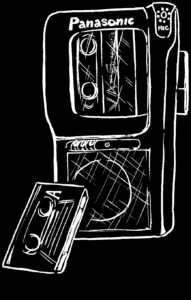 My second tape recorder took little microcassettes. It was significantly smaller, which made it far easier to use for dictation. It was also the first one reporters could use (instead of microphones) to shove into the faces of lawyers, criminals, and politicians so they could document the differences between them, if any. However, in one way, it was a step backward because the smaller buttons made it harder to use for transcription. Ahh, transcription… “That,” as Captain Hook so eloquently put it, “is where the canker gnaws.”

One of the great wonders of technology is the fact that every new advance comes with a built-in method for losing as much time, and/or money, as it promises to save you. Transcription is the perfect example.  Words are precious. Actually, only about 1% of words are precious. The other 99% aren’t worth the pixels or paper they appear on. Extracting the good ones is like panning for gold. Unlike most activities, the more you throw out, the better the final product. And there’s little environmental impact except for the energy required to hit the “delete” key. The problem is that if you’re going to go to all the trouble to record your random thoughts or an interviewees’ mumbled answers, it’s easy to feel you need to transcribe everything, in case there’s a nugget buried in there. You may know perfectly well that the universe will remain intact even if you don’t fix all the spelling or punctuation as your fingers race to keep up with the playback. Hell, nothing will be lost to posterity if you miss a whole sentence now and again. But, when you’ve spent fifty years trying to get everything on a page just right, it’s really hard to leave a barely decipherable jumble of words in your wake. Even now that I use online transcription programs—which, under the right circumstances, can be remarkably accurate—I’ll spend an unforgivably long time fixing its mistakes, no matter how trivial.

Sometime in the 1990s, I moved on up to my first handheld digital recorder. One cool feature was that it held hours and hours of recordings that you could organize into folders. You know how hard it is to set most car clocks? Setting up folders in an old-fashioned digital recorder was exponentially more difficult. Almost as difficult as figuring out why you’d want to in the first place. Finally, naive as it might seem now, there was something a little disconcerting back then about not being able to see where your words were going. As if invisible bits and bytes were any less reliable than a fragile piece of skinny tape. In fact, they were less reliable. Shortly after I got my first digital tape recorder, I spent a day interviewing a half dozen specialists in some sort of byzantine medical procedure. While driving back to the office, I pushed a few promising buttons to listen to the interviews. In the process, I did something that turned my display into Japanese. After a few customer service calls, I found out that all I had to do was reformat it by following the instructions on the screen. Which were in Japanese. It didn’t end well.

Soon thereafter, however, I got my first digital recorder with a computer interface. That was an advance. Not only could I put music files on it too, but I could plug it into my laptop to play/pause more easily while transcribing. More importantly, I now had a backup, if I connected to my computer before doing that Japanese thing. 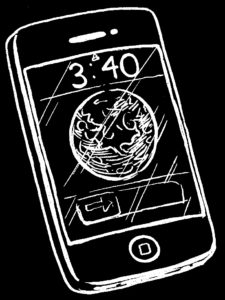 Then the iPhone came along. Now I could think, record, transcribe, save, and backup all at once! And spend even more time not writing in the process. All thanks to SIRI, that aural them fatale and oral bête noir of the spoken word who, just like many humans, seduce you into thinking they understand what the hell you’re talking about. Which can lead to confusion at best, and embarrassment, broken friendships, or, I suppose, divorce at worst. No offense, SIRI,*, but between you and your vapid personal friends the Emojis, communication has taken one giant leap backward. If Jefferson had used SIRI, the bedrock of our freedoms would be the immortal question: “Will the students be self-evident, oh Nana creative equal?” Thoreau would have been left babbling about all those “massive men realizing quiet desperation.” People would continue to think Marilyn Monroe was a “ditzy blonde” for allegedly saying, “‘Dis guy’s that limit your minds” when actually she said: “The sky’s not the limit. Your mind is.” And Bob Dylan wouldn’t have even tried. He just would have drawn an emoji of a stone rolling down a hill.  That’s the danger SIRI poses to the English language if not all life as we know it.

Finally, if you’ve watched too many episodes of Mission Impossible you’ll want to give one of these a try. Yup. I own one. My very own pen voice recorder. It records remarkably well and has all kinds of cool features you can spend days practicing and never use. Is that legal, you wonder? Well, according to my reading of the law: “It is not illegal to record someone without their consent in a public place if they are visible and audible, especially if they don’t have reasonable expectations of privacy. But in a private setting, such as a bathroom or changing area, recording someone without their knowledge is illegal.” Suffice it to say, I have never recorded anyone, even myself, in a bathroom or changing area. The great thing about this pen is that you can put it in voice-activated mode so when you go for walks you can keep it in your breast pocket and anytime you get a bright idea just start talking to yourself. Unfortunately, I don’t wear shirts with breast pockets. But, the best thing about it is that it’s a real pen. So I can use it to write notes at meetings and jot down random one-liners, just like I did in the ’60s and ’70s. Trust me, that saves a lot of time.