How I Learned to Write. 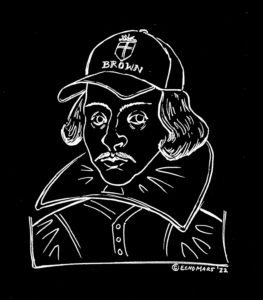 My father Elmer—a rather odd moniker for a Jewish kid from Pawtucket, Rhode Island—taught Shakespeare at Brown University for almost 40 years. But he could quote Harpo as easily as Hamlet, Philip Marlowe as easily as Christopher Marlowe. A good line was a good line. Provenance had little to do with it. He was an exacting grammarian who would repeatedly remind anyone within earshot that “the reason is because” is redundant…ditto for “proactive,” and that you shouldn’t start a sentence with “hopefully” (no matter what anyone else said). But he also suggested that beginning sentences with conjunctions was permissible if done sparingly; it was OK to occasionally split infinitives and end sentences with prepositions if you needed to. Sentence fragments were also OK. In moderation. If you catch my drift. Rules were meant to be broken but only if you knew you were breaking them and had a damn good reason for doing so. It was more important for you to have command of the language than for it to have command of you.

Elmer taught me the crucial difference between what I thought my words were saying and what they actually said. In the former, the reader can only watch from a distance as phrases and sentences careen around the writer’s brain, trapped in self-referential loops. In the latter, the writer invites the reader in—whether slowly or by throwing the door wide open in the very first sentence. That way, they can begin to read together. They may not agree. They may not even like each other. But they are at least on the same page.

In 1967, I wrote an impassioned essay for my high-school paper looking at the brutal massacres of Vietnam citizens in light of the Nuremberg Trials. Elmer pointed out that since the piece was riddled with false equivalencies and tenuous logic, it would be hard for the reader to fully appreciate the righteous passion behind it. I stormed away in frustration, of course.  Three years later, he tried to convince me to apply the same discipline to a paper I wrote arguing that many biblical visions were drug-induced hallucinations. He suggested that my “brilliant”  insights wouldn’t be taken seriously if I kept jumping to so many equally drug-addled conclusions.

One of the more misguided flaws of my generation was the assumption—particularly when hallucinogenics were involved—that you had to be there. A reader has never had to be there. Otherwise, there’d be no science fiction. Not to mention One Flew Over the Cuckoo’s Nest. These days, I often think of Elmer when reading emails and texts. It is a good thing that he shuffled off his mortal coil almost 30 years ago. While he might have considered emoticons a mildly amusing use of keyboard letters and symbols, he would have considered emojis an abomination (one of his favorite words). Even now I can’t use them for fear he’ll come back and smite me. I mean this was a guy who said if you had to use an exclamation point your words weren’t strong enough!!!!! To use a deranged smiley face with sparks flying out of its head would be something up with which he would not put…